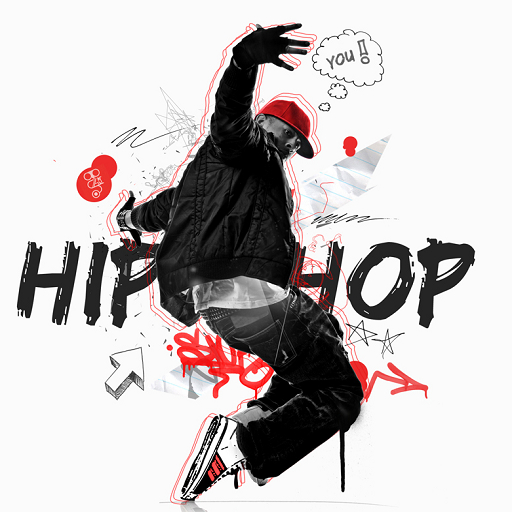 嘻哈音樂著重節奏多於旋律與和聲。它的特徵有：
Hip-hop music focuses on rhythm rather than melody and harmony. It is characterised by:

饒舌是一種帶有節奏、押韻、半唱半講朗誦的歌唱技巧及音樂風格。主音歌手通常會伙伴著另一位歌手，這位歌手會：
Rapping is rhythmical, rhyming, semi-spoken recitation. Often the lead vocal is joined by another member of the group who:

音樂取樣器是一部將任何聲音錄製、加工並重播的機器。音樂取樣是一段數碼錄的聲，它可以是一段低音結他的重複樂句，一段合唱樂句，敲碎玻璃的聲音，又或是任何可以用作音樂創作的聲音塑材。
A sampler is a device that can take any sound that is put into it, process it and play it back. A sample is a digitally recorded fragment of sound. It could be a bass guitar riff, a song chorus, the sound of breaking glass, or indeed anything.

嘻哈源於1970年代的美國紐約巿布朗克斯地區(紐約巿五個行政地區最北面的區域，以公園用地最多著稱)。
Hip-hop originated in the Bronx area of New York in the 1970s.

它的歌唱部，源於牙買加的Toasting傳統。Toasting是說話與有節奏的吟唱之間的混合體，最初是牙買加MC的表演習慣。
Its vocal origins lie in the Jamaican ‘toasting’ tradition. Toasting is a cross between talking and rhythmic chanting which was originally practised by Jamaican MCs.

African-American DJs, such as Grandmaster Flash and the Jamaican-born ‘father of hip-hop’ Kool Herc, extended the instrumental sections (or ‘breaks‘) from records by mixing between two identical copies of the same record.

Some of the DJs (or MCs) rapped over the top of the ‘breaks’ in a style called MCing (or emceeing) – where words and rhymes were spoken in order to encourage the audience to dance.

Dancers would get up during the breaks and perform a highly gymnastic style of dance using head and back-spinning. They became known as breakdancers.

Early hip-hop was performed live, usually at parties. The first hip-hop record is widely thought to be Rapper’s Delight by The Sugarhill Gang, which was recorded in 1979.

In the 1970s and 80s, lyrics often focused on social issues, giving young African Americans a platform to have their voices heard. The beat was almost always in 4/4 time, and the music often included drum machines and synthesizers.

In the 1980s, artists began to use the human body in order to create rhythms, using the mouth, lips, tongue and other body parts to create beats. This vocal percussion technique is called beat-boxing. The first performers to use this technique included Biz Markie and Doug E. Fresh.

Dance music DJs use different ways to manipulate the sound of recordings, adding their own creative element to the music they play. Originally DJs used vinyl records, but today many use CD decks, laptops and software packages to mix tracks, loop sections and create new compositions live.